Book review: A Year on the Wing 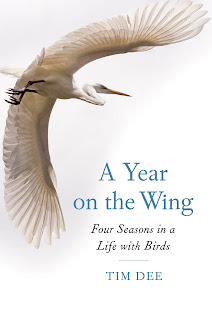 "It is hard to sleep under a northern summer night. At midsummer in Shetland rain gallops on the roof. Outside, arctic terns and blackbirds keep up their noises through the darkless night, a troubling mix of scream and serenade, harangue and consolation."

So begins A Year on the Wing (Free Press, October 2009) by Tim Dee. As I held the book for the first time and started to turn its pages, I felt pulled into a world that was both familiar and totally alien. Though Mr. Dee lives in England, the birds he pulls from the literary air are similar enough to an American birder for us to instantly form a bond with what he is seeing.

This compact and filled to overflowing book covers a year in the life of birds. From June to May, we follow Tim Dee from Shetland and diving gannets, to woodcocks in Cambridge, to a lack of peregrine falcons at the Gorge at Bristol. A dip into North America brings him face to face with Western Bluebirds, which he paints for us:

" I saw a pair of science-fiction birds, Western Bluebirds, their electric blue marking them as birds from the future, or rather from an old color-saturated version of the future: a 1950s bird dreaming of the space race."

He takes us back to his three-year-old self, chasing his first swallows, onto a painful mental connection between peregrines and the death of a stranger, and the first time he held a wren for ringing (banding). This book holds more than the binding can contain: A world of birds and our desire and ultimate failing to make them ours.

Full of muscular language and unexpected pairings of ideas, this is a book to curl up with on a snowy weekend. It cannot be skipped through like a summer field, but sipped and savored as a flavorful, hot mug of coffee.

Get two copies: One to give to a bird-loving friend, and one to keep for yourself.

Susan's Score: Two Wings Up.
Click here to buy.
So sayeth Susan Gets Native at 9:55 AM

Great review, Susan. You have the touch.

What a beautifully written review, I'm going to go and give this book a look right now.

I hadn't heard of this book yet! Awesome! Its now on my list to buy or read!