But you gotta have friends.....

"I get by with a little help from my friends..."
~Joe Cocker

"Friends are God's way of apologizing for our families."
~Unknown

I've always been grateful for the friends of high quality I have picked up over the years. My best friend, who I somehow get to see about twice a year, knows everything there is to know about me and she still loves me.
My friends of the Flock are the newest addition to my stable of blessings. From right up the road to all over the country, I can count on help when I need it, and they know that they can get the same from me.
As I said in this post, I am effectively camera-less. When Mary heard of this, she made the hugely generous gesture of offering her spare camera for me to borrow until I could get a replacement.

I was floored. We nature lovers/birders know how much our cameras mean to us, so this was a big deal.

It arrived today, and since it arrived in the afternoon, I didn't have a lot of time to going birding or anything. So I took random photos of random things, you know...just to kick the tires so to speak:

Hazard light button (macro from about a centimeter away): 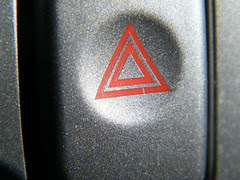 A dumpster at the United Dairy Farmers from really far away..the zoom on this thing is FABULOUS, and when it comes to nature photography (and dumpster photography for that matter) zoom is very important: 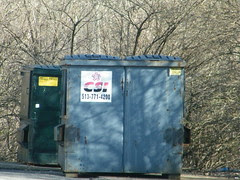 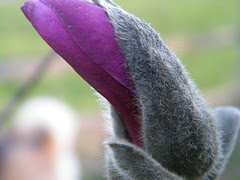 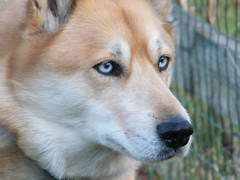 And also at the UDF, Kathi striking a pose: 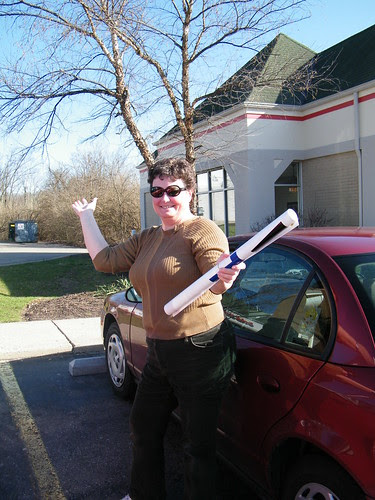 There are lots and lots of little functions to learn...and I can't wait to master them all.
Tomorrow I'm taking it to RAPTOR to see how it makes my birds look!
THANK YOU MARY !!!!!!
So sayeth Susan Gets Native at 7:35 PM 12 comments:

Blame it on the daffodils

Those of you who are longtime readers of this blog will remember the "Camera Fiasco". (Click here for the big ol' stinking rant)
The camera I received for all that drama turned out to be a pretty good one. Insane zoom for a mid-priced camera, and it had plenty of bells and whistles for me to figure out and exploit.
It took all the abuse of Cape May 2008, New River 2009, and I was hoping it would come along for New River 2010.Last night, we decided to go to a local pizzeria (very cool...it was built in the old water works building in Loveland and makes fab fire-baked pizza) and while we waited for a table (we weren't the only people who thought The Works was a good idea for dinner) I wanted to walk down to the tracks that come along the back of the building to see some fresh blooming daffodils.


We were milling about, kicking gumballs and enjoying the daffodils growing under the trees. Lorelei wanted to learn how to take macro shots, so I pushed the appropriate buttons on my camera and showed her how to focus. A few minutes later, she slipped on some gumballs and went down.
I snatched her up and checked for fountaining blood or foreign objects. When none were found, I brushed off her knees and gave her a kiss.

Geoff said, "That was impressive."
Me: "What was?"
Geoff: "Well, you are more concerned about Lorelei than your camera."
Me (I'm a little slow sometimes): "What ABOUT my camera?"
Geoff: "It hit the ground when Lorelei fell."

I wasn't worried too much...I've dropped it a few times. But not when the lens barrel was extended. I pressed the power button, and it powered off. But the barrel didn't retract.

SHIT.
After several tries, I knew the lens barrel was off track or the motor shattered or some other horrible internal tragedy had occurred.

We were seated inside a few minutes later, and the remainder of the dinner was spent with me in barely controlled tears, and Lorelei was quiet. Isabelle, in a show of immense sweetness, offered to let me borrow hers until I could get a new one. (Hers is a small, pocket camera, but I was moved by the gesture)
We do have a spare that only needed a charger and cable, and though it has a pitifully short zoom, it will have to tide me over for a few weeks until payday.

I'm pretty sure that Lorelei doesn't understand how much money it will cost to replace my camera (and though I took it in for a quote, since it will cost upwards of $200 to fix, we aren't going to bother) she also didn't apologize.

I don't blame her, not one bit. She fell, it was an accident. But a "I'm sorry, Mommy" would have made me feel a little better.

So I blame the daffodils. 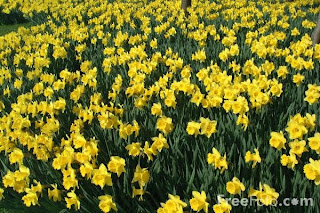 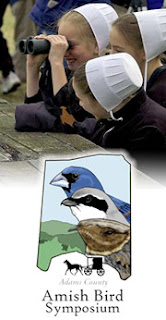 *I will never do it justice. It's just awesome.

This weekend brought the 7th annual Adams County Bird Symposium, which I have blogged about here. It's probably the most unusual symposium I've attended, smack dab in the middle of Amish country.

As usual, I picked up my birds the night before and stayed at a hotel near the event. I usually enjoy this time to myself, to hang with the birds, watch TV and listen to the woodcocks in the field behind the hotel. Now, I don't know if it was the change of seasons, the sodium levels in the McDonald's food, or the bleach odor coming from the pillow cases and sheets....but I got a migraine. A migraine that kept me awake all night long.
Six o'clock rolled into view and I was able to make it to an open gas station for ibuprofen. I'm not trying to whine about this but to set the stage. I performed my RAPTOR duties with NO SLEEP.
The closest Starbucks is an hour away from the event.
Thankfully, I had previously set up a coffee rendezvous, in the form of Les, my Yoda (this post and this post).

This revved my engine enough for the day to begin.


Vendors at the symposium range from Ann Geise, artist and field naturalist, to Ron Austing to the Ohio Ornithological Society to some Amish folks selling Leica optics.

I have to say that my little RAPTOR table was pretty popular. Every break brought huge crowds back to my corner to photograph the birds, ask questions and general oohing and ahhing. 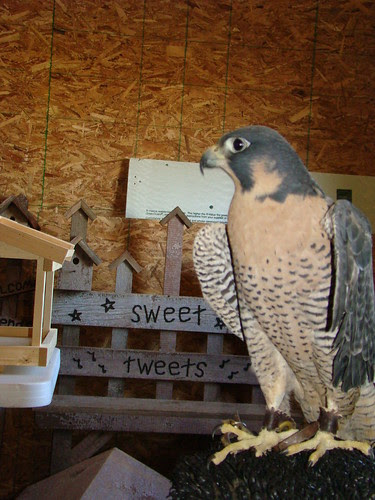 Didn't realize that part of the Amish birdhouse/garden art table was in this shot.
I think the "Sweet Tweets" thing was a bench. Cute, huh?


This was Storm's second annual appearance at the symposium, since he's a local boy.
(He was found there in 2007,just a few miles from where the event is held) 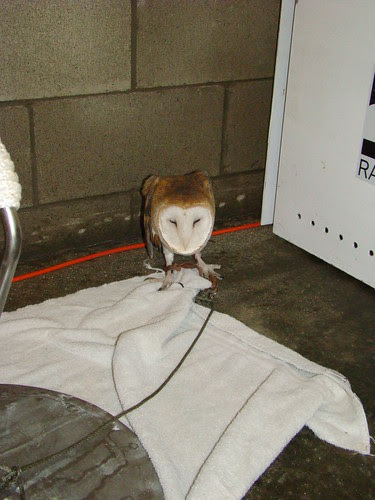 He spent a good bit of time on the floor, instead of his perch (he hates perches)... 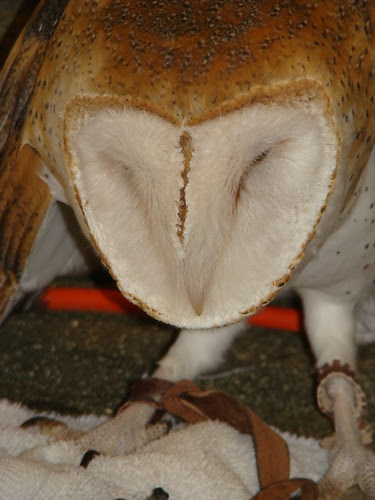 Go to this post to read about Storm's "Golden T". 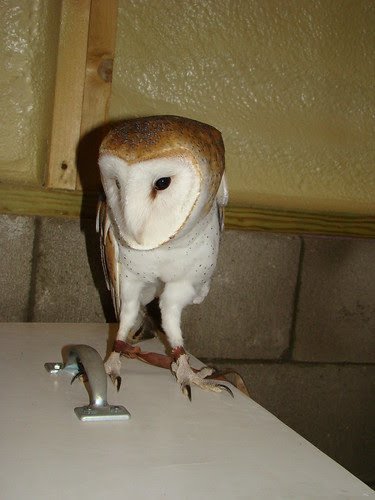 He also spent a lot time on TOP of his carrier, which is unusual.
I don't usually let the birds sit there, but it made him happy and kept him from
a. Being underfoot and attacking my shins, and
b. Jumping around and irritating his legs by yanking on his jesses.


Thirteen the Screech Owl did his best Animatronic impression, to the delight of the crowd: 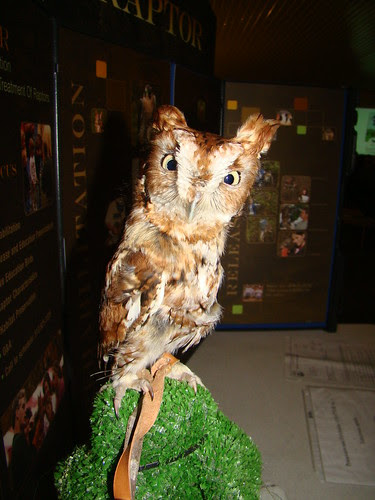 I am always careful to bring birds that will be a good fit for the venue where we will be presenting. A large, quiet room is a good place to bring our Red-tailed Hawks, our Barred Owl and Kestrels or Earl the Turkey Vulture, while a noisy, constantly moving crowd would suit Lucy and the rest of our owls.
Part of being an animal presenter is knowing the limits of your animal. This was a noisy crowd with an overnight stay involved.
I overnighted our Red-tails once.
That won't be happening again.

But I can't stand it anymore and have to tell you about the day's highlight.

I was holding Lucy the Peregrine Falcon and answering questions during a break. My energy was flagging and I wondered how I would be able to stay awake for the rest of the afternoon.
(I vaguely remember Les calling me "a Princess", but I didn't smack him because
a. I didn't have the energy, and
b. He brought me coffee so I owed him my soul.)

Out of the crowd a man appears and asks if I would bring Lucy up during his talk.
I looked up at him...and it was Thane Maynard.

Being from Cincinnati, I was born knowing who he was, but if you don't know, here's a quickie bio:
He is the director of the Cincinnati Zoo and Botanical Gardens.
He does a daily show on NPR called "The Ninety-Second Naturalist".
He has appeared on Good Morning America, the Today Show, CBS This Morning, and Late Night with Conan O'Brien.
He has co-authored a book with Jane Goodall.

I knew he was going to be a speaker, and I was in full-on Geek-Out mode, but when he just materialized, I felt my knees go a little weak.
He knew Lucy's name and how she came to be at RAPTOR. I don't know how he knew that.
So he wanted me to bring Lucy up during his talk about conservation success stories, etc.


After he walked away, I looked around at some of my friends near the table and the squealing began.

I somehow got through those two minutes of standing up there with him. My face was on FIRE and my voice was shaky, but everyone said I did okay.

So, anyhoo: Here's a photo of me, Lucy and Thane Maynard!! 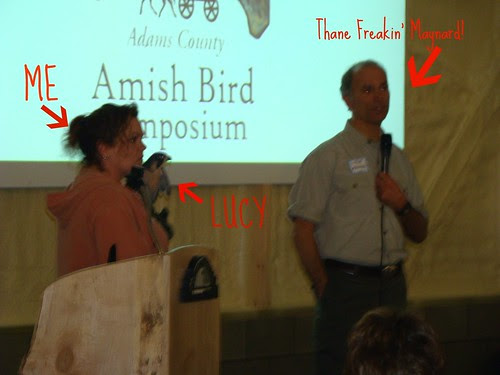 (Photo by my awesome sister-in-law Rachel, who was as geeked out as I was)
So sayeth Susan Gets Native at 5:26 PM 10 comments: