You're good for me

So sayeth Susan Gets Native at 7:07 PM 3 comments:

Email ThisBlogThis!Share to TwitterShare to FacebookShare to Pinterest
Labels: video

So sayeth Susan Gets Native at 9:27 PM 8 comments:

Email ThisBlogThis!Share to TwitterShare to FacebookShare to Pinterest
Labels: Cape May, The Flock, video

Cape May 2010 Post #2: A Jeff sandwich on Flock bread. With a Liz pickle (and a hell of a lot of name-dropping)

Let's go back to Thursday.  I had gotten into town late (12 hours in the car and punchy as hell).  Delia and I were in our jammies when a text came from Jeff asking if we were staying up late.  We were invited to Mark Garland's house where Jeff, Liz, Bill and a few others were happily imbibing some Scotch.

There were introductions all around...I don't remember a few of them, but one stuck in my head.  But not until later when Delia started hollering about it.  The one that had us cussing and squealing was Richard Crossley.  Yeah ,the Richard Crossley who writes field guides.  Well, we geeked out totally and for the rest of the weekend, we called him "Richard Freakin' Crossley!".

I didn't really want to drink, having come off a twelve hour drive, but as the Scotch was poured and re-poured, I thought I might like to try it.  I didn't like it.  So I sipped a little more.

It was so, so, so very cool to be sitting in a living room with all of these massively talented birders and authors. (Delia told me later that I looked like a kid at Christmas, sitting on the floor just smiling at everyone.)

A call came in.  The words "massive flight" were used.  Everyone got up.

Into the cars and down to the boardwalk on Beach Ave.  We looked up, and there were hundreds of birds overhead.  Now, remember...this is 11 o'clock at night.  The birds were lit up from underneath by the street lights and they resembled fireflies...blowing leaves....embers from a camp fire.  Hundreds and hundreds of them.  Some were falling into the street, exhausted.  I got my lifer Savannah's Sparrow right there on Beach Ave.  In the dark.
Robins.  Chipping sparrows.  Yellow-rumped warblers.  Woodcocks.  And many others that were not identified. The biggest bird spectacle I have ever seen.


I have never birded at night, unless there were owls involved.  This was something completely different. 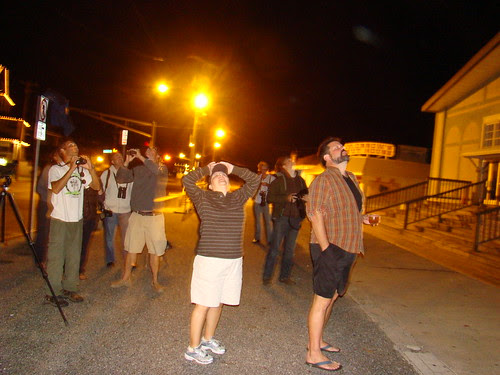 Wow.  I don't know who has the better legs, Jeff or Delia. 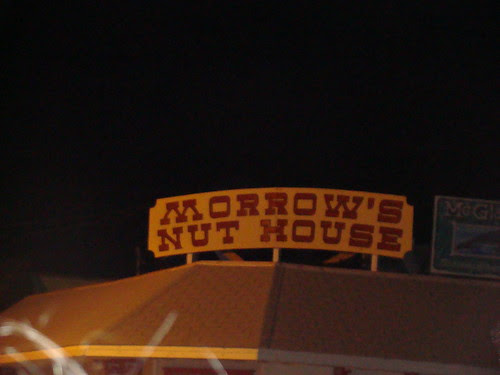 We were right outside Morrow's Nut House. Seemed fitting.

The lights were getting in the way... 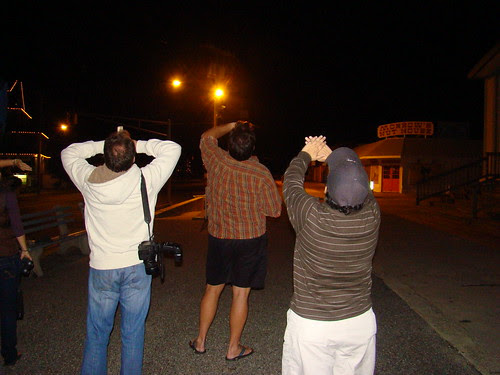 We moved behind the convention center to get out of the light.

There in the dark, it was much easier to see the birds.  They were lit up but the lights were no longer in our line of sight.
My neck was getting sore, so I had the brilliant idea to lay down on the boardwalk to enjoy the birds in comfort.  And everyone else eventually joined me.

Somehow Delia and I were lucky enough to snuggle up to Jeff for warmth, and Liz completed the dish.
A Jeff Gordon sandwich on Flock bread.  With a Liz pickle on top. 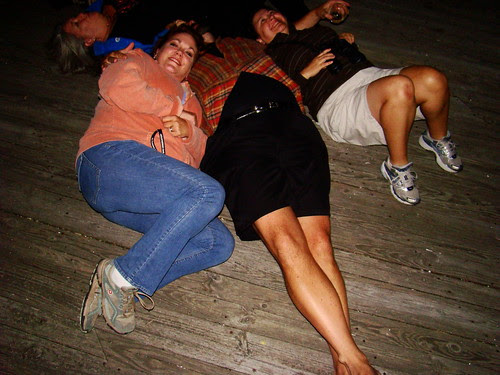 So sayeth Susan Gets Native at 9:51 PM 6 comments:

Back from Cape May and reeling around trying to find "real life" again...because what happens in Cape May isn't real.  It's a fantasy that birders fall into every year and the time comes, too soon, to wake up and go home.
My posts are not going to be in chronological order...I'm starting with Friday night, since it's the easiest.
The scene:  The C-View, a little sports bar in town, which proclaims to be the oldest tavern in Cape May
The people:  Delia, Laura, Beth, me, a few of Beth's friends and a local or two
We were sitting there drinking, having a great time.  Delia explained "jammers" to me:  Someone who "looks" gay but isn't.  We were puzzling over a woman at the bar, and at one point the woman came over to us drunkenly and started chatting us up.  Turns out she was puzzling over us too.
She described herself as Cape May's "Town Lesbian" and proceeded to lead us in a searing rendition of Neil Diamond's "Sweet Caroline".  And gave us grief for not singing louder and more robustly.
Sorry, drunken stranger.

But check out Beth....she even got the "Bah Bah Bah's" right!