Harriers against the sunset

This past weekend I enjoyed my first OOS Winter Raptor Extravaganza at The Wilds in Muskingum County, Ohio.
History of the Wilds:
(From The Wilds website)
Around the world, habitats are being severely degraded and overexploited-forests are being clear-cut, wetlands are being drained, and land-use patterns are changing to accommodate suburban sprawl, agriculture, and mineral extraction. Nowhere is this more evident than in southeastern Ohio where forests were destroyed to accommodate agriculture, and agricultural areas were subsequently destroyed by extensive surface-mining for coal. While subsequent efforts at reclamation were largely successful at restoring ground cover, controlling erosion, and providing areas for recreational activity, questions remain as to the biological functionality of these areas. What appears to be “green and lush” to the casual observer, may instead be an area of decreased biological diversity, with assortments of invasive species, and may not be returning to a functional ecosystem.


The landscape of the Wilds has undergone a series of major transformations, from the open surface mining to the reclaimed grasslands and now areas are being converted to healthy, high diversity meadows.


The Wilds is home to a diverse list of raptors in the winter, and I had heard about this event for years and decided it was time to bundle up and subject myself to Arctic temperatures and howling wind for the sake of seeing so many birds of prey.


(And there were a bunch of songbirds around, too.  I was more interested in the birds of prey.)


With very little narrative, here are some photos from the day.


It was cold.
Meeting point, in lower parking lot: 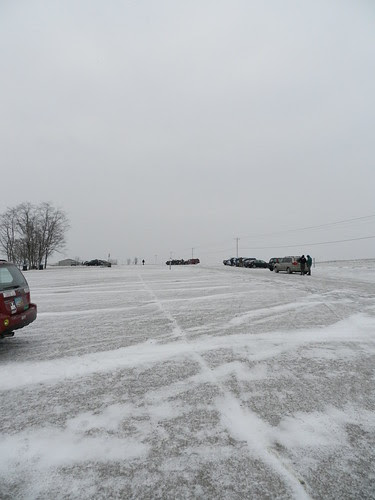 It was around 20 degrees as we all convened, with a wind chill of "Holy crap it's cold!" 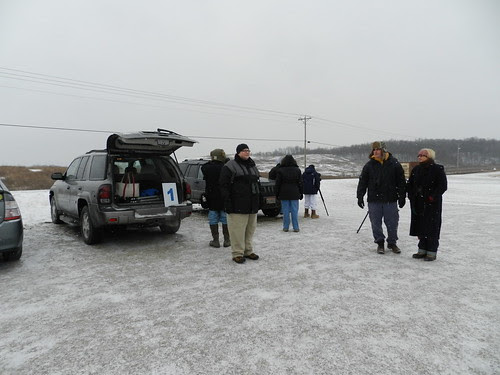 Erik Bruder and other cold birders. 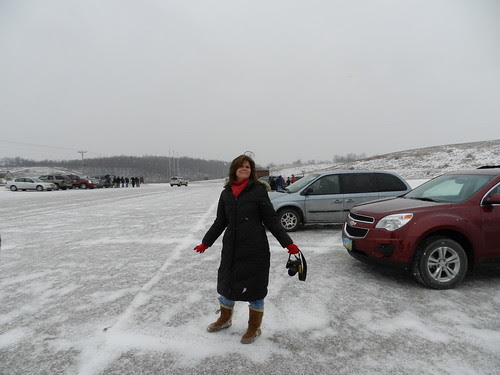 Tricia West!  I was so happy to have her in our group.  For all of our Facebook banter, we have never birded together. 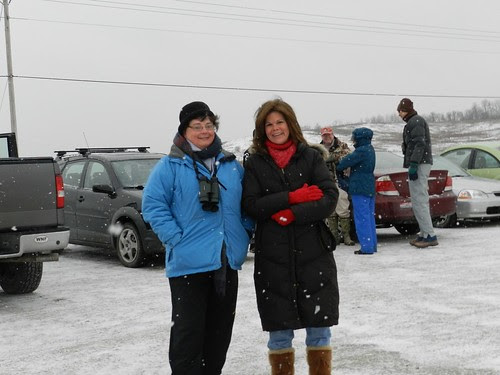 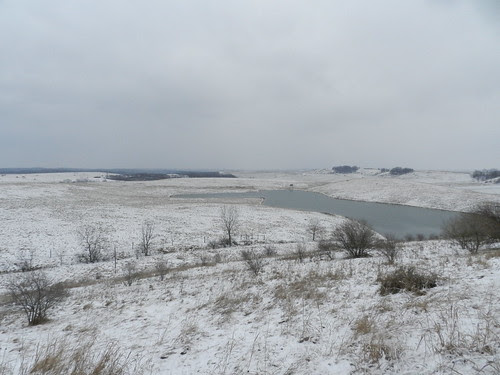 The view at Jeffrey Point 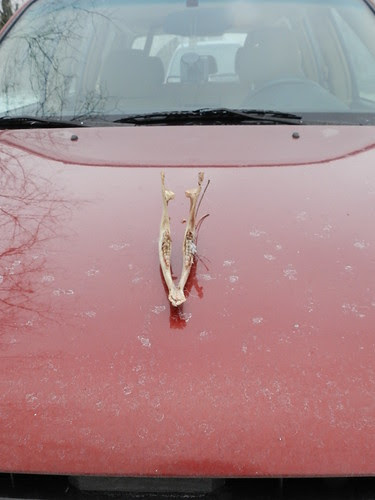 Someone left me a hood ornament while I was out pacing through a pine stand looking for Long-eared Owls.  The lower mandible of a six month old deer.  Thanks a bunch, guys!


One of the highlights of the day was this: 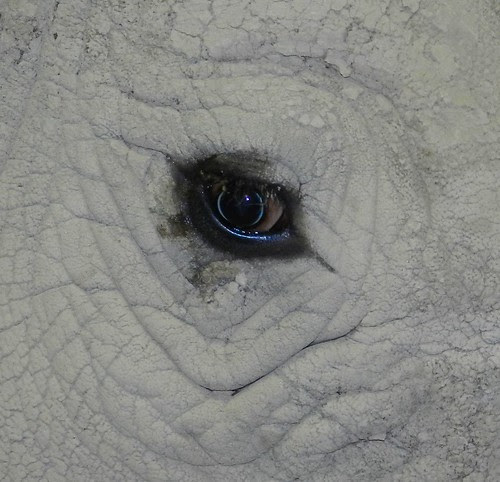 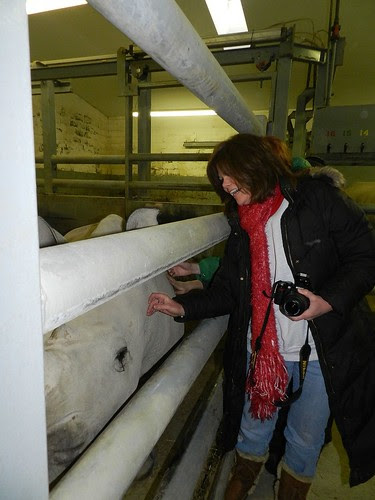 Tricia acted like she pets baby rhinos all the time. 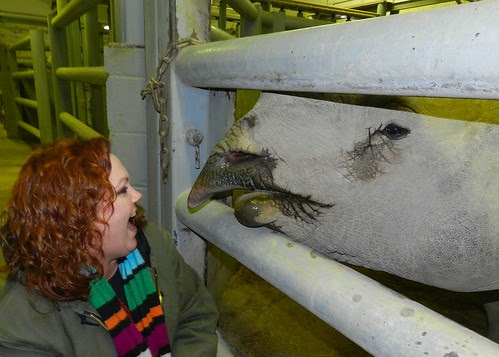 This was the Asian rhino...the ones with the prehensile lip.  And this one kissed me.  I loved it immensely. 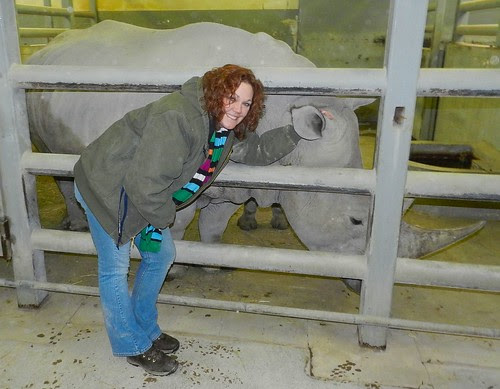 This mama rhino enjoyed having her ears scratched, and leaned against the rail to get closer.
This was one of those moments in my life that I will never forget....and the back of a rhino's ear is softer than you would imagine. 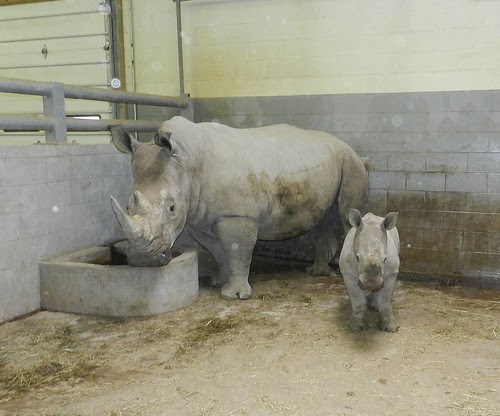 I took very few bird photos.  The cold and wind and shivering on my part did  not lend itself to good photography conditions.

This Short-eared owl was good enough to sit still for a minute or two. 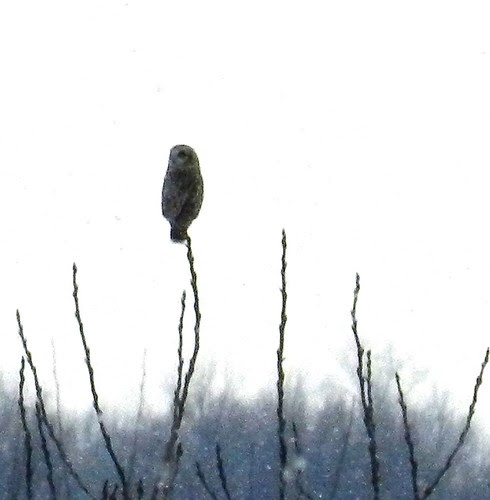 The setting sun made a vista out of a field of hay bales. 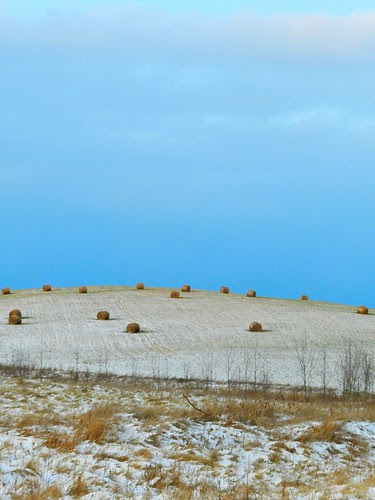 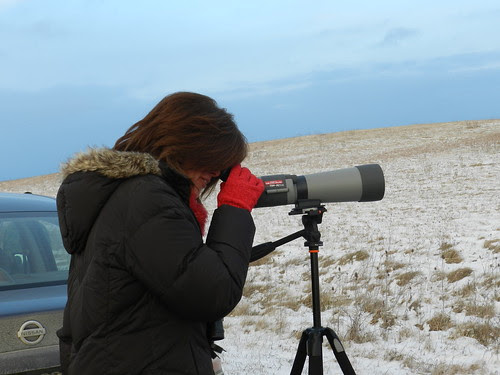 Tricia got her life Merlin, spotted by Phoebe Thompson.

We welcomed the sight of the sun finally coming through the clouds, and said goodbye to it in nearly the same breath. 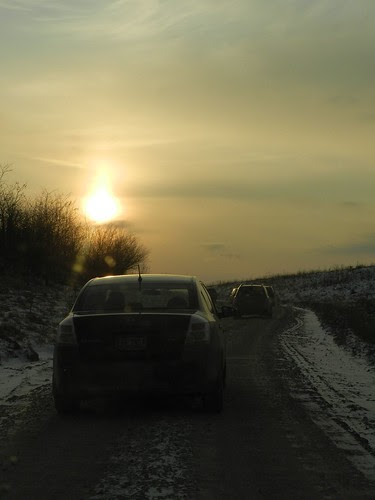 As harriers coursed over the fields in front of the setting sun, I was thankful for the heat in my car, the love and laughter of my friends, the dinner waiting for me, and the fact that I am a birder and can experience days like this one.
So sayeth Susan Gets Native at 8:08 PM 9 comments: