I thought about doing a raptor ID post after reading Mary's post about her local raptor rehab center. And what kind of educator would I be if I couldn't give folks a little help identifying raptors?
I thought I would start with the three birds of prey you are most likely to find; Cooper's Hawk, Red-tailed Hawk, and Red-shouldered Hawk. And it was a good day to do this, because I saw quite a few. Some of these are from today, and others are from recent jaunts. 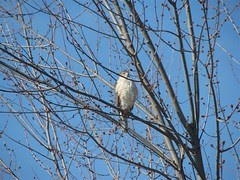 Adult Cooper's Hawk. (Accipiter cooperii)
Accipiters: Short wings, long tails. This is a woodland bird, and the combination of short wings and long tails helps them maneuver through dense trees. These guys eat birds mostly, so being fast is an asset. Remember the rules of anatomy and physiology: Form equals function.


The first thing I notice about Coops is the dark cap and flat head. Coops are about 15 inches or so in length, with the females being almost 25% larger than the males (this is true with most birds of prey). To use a common object to compare, since it's hard sometimes to gauge size out in the field: Coops are about the length of a loaf of bread.
Lookalikes: Sharp-shinned Hawks: Much smaller, about blue jay-sized. They have very similar coloring, with subtle differences in the tail shape at the end. In flight, a Coop will have a prominent head, a sharp-shinned will look like it doesn't have a neck. 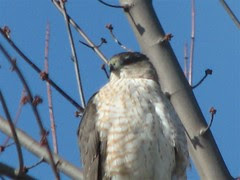 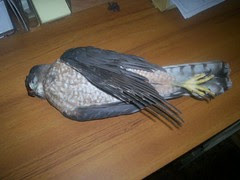 (This is a DOA Coop I picked up in downtown Cincinnati) 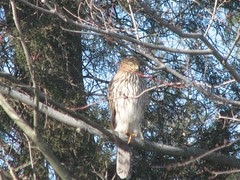 Here's a juvenile Coop...note the yellow eyes and vertical streaking on the chest. 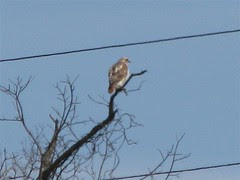 Buteos: Long wings, short tails.
***
interesting tidbit: Buteo hawks are referred to as buzzards in other parts of the world. The name was mistakenly applied to vultures in North America by the early settlers.
***

Their prey is mostly small mammals, and they are a "wait and bate" hunter. They will sit high on a perch and scan the ground below them and then pounce down on the prey.
It's hard to mistake an adult (3 years or more) red-tailed hawk. The tail is very obvious while perched or in flight (in the sun, you can see the red through the tail).
They are about 18-26 inches long (think about two pieces of paper put together lengthwise.) Dark brown backs and cream to white chests (but there are many subspecies out there, depending on what part of the country you are in).
A belly band of brown streaking is diagnostic, but there are variations. As you can see in the photo below, this female has no belly band. 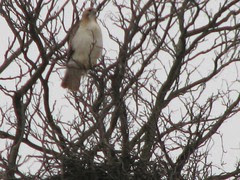 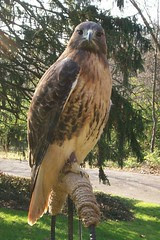 Helen
She was a fairly dark red-tailed. But you can see her belly band. 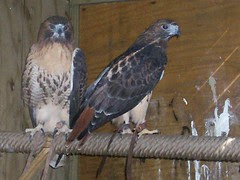 These are our program red-tailed hawks.
This is a good picture, to show size differences between males and females:
Scarlet (female) is on the left, Two Socks (male) is on the right.
I can always tell them apart. Scarlet just looks like a bad ass. 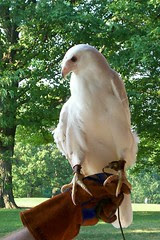 And sometimes, nature throws us a curve ball. This is Isis, our program leucistic red-tail. She is NOT an albino: She has a dark spot on the back of her head, and she also has the most beautiful blue eyes.
If you see one like this, call someone!

Lookalikes: Red-shouldered hawks. But if you look closely, you will see the differences right away: 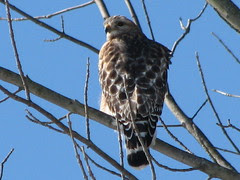 Adult red-shouldered hawk. (Buteo lineatus)
Another buteo: Long wings, short tail. This is a hawk who also likes small mammals, but will also eat birds, amphibians, etc. (Wait and bate)
Adults are about 17-24 inches long (roughly the same as red-tailed).
In flight: a pale crescent at the base of the primaries (near the "wrist").
They have a chunky, black and white barred tail and red shoulders (hence the name).
An orangey chest will differentiate them from red-tailed.
They have a more scalloped look to their backs than red-taileds.
Lookalikes: Red-tailed hawks.
Juvenile red-shouldereds look very much like Cooper's Hawks, though they will have a bit of red on the shoulders. 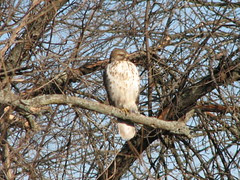 When in doubt: Look at the tail and the chest.
So, is this a red-tailed or red-shouldered?

I hope I didn't confuse anyone. I probably did. I do a lot better vocally, in my programs.
It also helps to have a bird on my arm.

So sayeth Susan Gets Native at 6:54 PM

Susan, no you didn't confuse me. I see a lot of hawks around here and THEY confuse me. Getting a good shot isn't easy. I love this post and I'm putting this one in my favorites to view when I need it. I guess the Cooper's I saw in my backyard in January was a juvenile. I see many red-tailed around here. At the raptor center there was an albino red-tail but my photos were blurry. Oh, I wish I had focused better!

Thanks for taking time to "learn us" about hawks. They're plentiful but elusive high on their perches. YOU are a good educator, you wild thing!

Yes, I'm confused, but raptors do that to me!

The first time I saw a sharp shin up close (in a carrier) I was amazed with how small they really are - blue jay size is right on!

Coopers are abour crow-sized right? And the red tail is bigger and red-shoulder somewhere in between?

We only have the red-tailed hawk up here. The sharp shin's are larger than blue jay's here. Good post Susan!

I must add this post to my faves, I get questions all the time on these birds and you are truly going to save me the time in teaching everyone the difference in these birds! I love the use of different birds of each species and your thorough descriptions! Great Job!

Thanks for the raptor primer. In books or in your post, it all seems so easy, but in the field I'm usually lost. I can tell Accipters from Buteos (most of the time) but that's about all. My "default" birds are Red-tailed Hawks and Cooper's Hawks. Any Buteo is automatically a Red-tailed, and anything smaller is "Probably a Coop." I'm sure I mis-identify a lot of hawks with this primitive method.

Something I learned from Jay at the Amish Symposium and that I also read in BT3's book "Identify Yourself" is that the white undertail coverts (vent feathers) in a Cooper's Hawk can sometimes curl up over their backsides in flight, making them look like they have a white rump. That explains the "Mystery Bird with the White Butt" that I had fly through my yard last fall.

Can't wait for Part 2 of Raptor Class. When are the field trips?

I've been around the neighborhood tonight and you get the best photo week in review, hands down. That's in large part due to the fact that I'm so partial to Coopers, Cats and Herons. But also- you take just plain great photos with wonderful annotation. So, this has been a blast. You inspire me to go snap a few of Hannibal and the missus tomorrow.

Thanks for the lesson! I have two fuzzy pictures of hawks I have taken recently so I will use your descriptions to look for clues to their identities.
Ruth

I'm definitely confused but that's par for the course, eh? I will come back to this post again and again though.

What an awesome post Susan!!!
I too tend to call all buteos red-tails. Coops and sharp-shins I'm pretty much OK on, but red-tail and red-shoulders and rough-leg and broad wing?? My eyes spin in my head!! You're a terrific teacher and I want to know too- when are the field trips!!

Field trip?
I guess I will have to be the "hawk watcher" at Cape May, huh?
This post was exhausting. I was trying to think like a beginning birder, and cover all the field marks. But with a bird like RT's, there are so many variations.

Thanks everyone. Now I need to find good broad-winged, Harris, rough-legged pics. If anyone has some, email them to me.

Very nice site. I'm new to raptor watching. I recently moved to Portage Lakes Ohio. I've seen what I believe are Red Tails, Coopers Hawk and waiting to see an Osprey. I do have a question. Do Coopers Hawks fly in groups? I took a picture of 20+ preditory birds flying around together. They do not look like buzzards, but didn't think anything traveled together. I was thinking they were Coopers because my neighbor has pigeons, and they seemed to like his house! :)

Donna:
Predatory birds do not usually fly together, unless it's during migration.
Tell me more about what you saw. What about these birds made you think "predatory birds"?

They were circling over the house. Not flapping around like they were trying to get anywhere, just kind of gliding. I know that is a terrible description. They were the size of hawks I've seen, but this is the first time I've seen them in a grouping.

Hello! i was on the net trying to find out anything about a raptor. I don't know much about them, I just know the one I saw today is abnormal, at least for Minnesota. It was about the size of a red tailed hawk, maybe slightly smaller, rounded wings, creamish/white underbelly, and reddish/copper color on the rest of its body, including the wings. Does anyone know what this is? please email me at lantislove@hotmail.com